Tom Keating published a great little story about a week ago, stating that Fonality had won a deal with a Nortel affiliate called Blade for the installation of their Asterisk based PBX solution - directly displacing a comparable solution from Nortel.

On the surface, not too terribly exciting, but in reality this is a pretty big win for a company like Fonality and Asterisk in general. You see, the Fonality solution essentially is 1/2 (if not less) the price and offers twice the functionality of the comparable Nortel solution. Having sold Nortel solutions in the past, this is absolutely the truth. The proprietary nature of closed PBX solutions, cost business generally twice that of a comparable solution from an open source vendor and with greatly reduced functionality.

Where the story gets really interesting, is how a Nortel executive responds to Tom Keating's blog post. To put it mildly, the guys from Fonality basically said the Blade CEO 'flipped out' demanded to return it and retract a press release that they issued saying it was cheaper, and easier to configure, after I assume getting a phone call from Nortel brass. This will go down in the annals of 'stupid executive moves' of 2007.

Kudo's to Fonality for winning the deal - the losers here are the guys at Blade, who will now not get a Fonality system, but an overpriced proprietary solution from Nortel. I am sure the shareholders of Blade will be happy to know they company is spending money for no reason whatsoever on communication costs twice!!
Posted by Andrew at 4:13 p.m. No comments:

via Computer World - The FCC (in 2005) put forth a requirement to all VoIP providers that connect to the public telephone network, to provide methods to allow LEA to wiretap conversations.

According to the Computer World article.

The broadband and VOIP providers had to send the FCC by March 12 a plan to comply with CALEA, and by Monday they had to either set up a system that allows monitoring or hire an outside company to make it possible. Those that don't comply must make a good-faith effort to do so and may be referred for enforcement.

This requirement is a little ambiguous, in Vonage's case - they would need to provide wiretap capabilities for both OnNet and OffNet calls without question - in both cases someone is calling a phone number (even if it is redirected to a SIP URI), however Skype operates a little different than a traditional ITSP - in Skype's case would they be forced to provide a method of 'listening' for calls that are on the P2P network? Wiretapping a call that terminates to the PSTN via a SIP gateway wouldn't be that difficult; but Skype has publicly said in the past that all traffic on the P2P is encrypted and even they cannot listen in on calls or messages the way the system is set up.

So will the FCC force them to open up a method to do so, if they don't comply voluntarily? Or are P2P calls not subject to the same wiretap rules? It seems to be a bit of a grey area.
Posted by Andrew at 1:21 p.m. No comments: 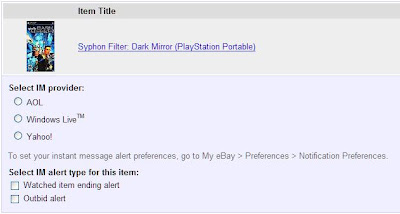 eBay's purchase of Skype promised innovative, unheralded e-commerce and voice capabilities merged into one cohesive platform, this transaction (nearly 2 years old; or an eternity in internet time) has brought little other than some superficial trials at integration. Paypal, eBay and Skype (the power of 3 as discussed at last years devcon) are still very disparate, separate companies.

This is a screen shot of eBay's IM notification service. It is pretty obvious who is missing, my question is - How can this possibly be allowed to happen? If I paid several billions of dollars for an IM platform, I am pretty sure I would integrate it into my core business and stop promoting my competition.

There is something greater than the sum of the parts to be achieved, but I am not sure the powers @ eBay understand it.

WOW, this is a great announcement, looks like the lads @ Joost have 'scored' a deal with the NHL to begin broadcasting games on the Joost Network, starting with the finals of this years Stanley Cup. Combined with Premier League Football - they have the UK and Canada locked up ! Can MLB and NBA be far behind?

I have exactly 7 Joost invites available to the first 7 comments left on this post. Need your first and last name + email.

From the press release courtesy - On the Wings

NEW YORK (May 1, 2007) – The National Hockey League (NHL) will offer free hockey programming to consumers on the Joost distribution platform beginning at the start of the 2007 Stanley Cup Final. The announcement was made today by Joost™, the world’s first broadcast-quality Internet television service, and the NHL.